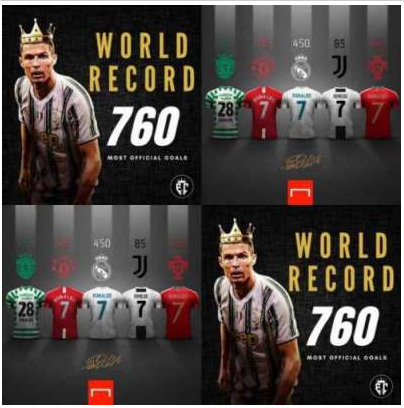 Cristiano Ronaldo became the highest scoring footballer
The 35-year-old Portugal and Juventus forward has hit the ball 760 times so far in his career.
The five-time Ballon d’Or winner recently surpassed Brazilian legend Pele (757), who is now third on the list of top scorers, followed by Romario (743) and Barcelona. Lionel Messi (719) is fifth. Cristiano Ronaldo has scored a total of 450 goals during his nine-year association with Real Madrid, including 118 for Manchester United, 102 for his country Portugal, 85 for current club Juventus and 5 for Sporting Lisbon. Done

Ronaldo’s best record is against Sevilla, against whom he delivered the ball into the net 27 times. He has scored 488 goals with his right foot, 139 with his left foot, 131 with a header and 2 with other parts of his body. Ronaldo has scored 46 hat-tricks so far, while scoring twice on 136 occasions. He has so far scored 4 goals on 8 occasions and 5 goals on 2 occasions. Ronaldo has scored 311 goals in La Liga, 134 in the UEFA Champions League, 84 in the English Premier League, 67 in Serie A, 30 in the FIFA World Cup qualifiers, 31 in the European Championship qualifiers, 13 in the FA Cup and the World Cup. The Cups include 7 goals.