How did Russian diplomats escape from North Korea? Video surfaced 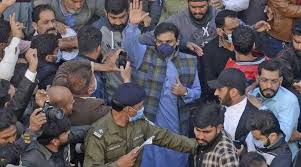 How did Russian diplomats escape from North Korea? Video surfaced

Fed up with the harsh sanctions imposed on North Korea by Corona, Russian diplomats took a difficult route and fled the country.

According to foreign media, 8 employees of the Russian embassy in Pyongyang, the capital of North Korea, and their families left North Korea after traveling through difficult routes.

According to media reports, the diplomats and their families traveled 34 hours to leave North Korea.

The Russian embassy said in a statement on its Facebook page that the only way to get out of North Korea was to travel through difficult conditions.

The diplomats began their journey with their families by train and traveled 32 hours on North Korea’s rotten railway system, after which they took a two-hour bus to the border from where they took a train trolley and The family moved into it with their belongings.

The North Korean embassy also released photos of the diplomats and their families aboard the trolley.

The diplomat dragged the hand trolley for about 0.6 miles on the bridge separating Russia from North Korea, after which he arrived at the Russian station and met his colleagues who helped him to the airport.

It should be noted that not a single case of corona virus has been officially reported in North Korea so far.

Previous Posts Saudi Arabia rejects US report on Jamal Khashkji murder case
Next Posts Former US President Bush is painting a portrait of which Pakistani?