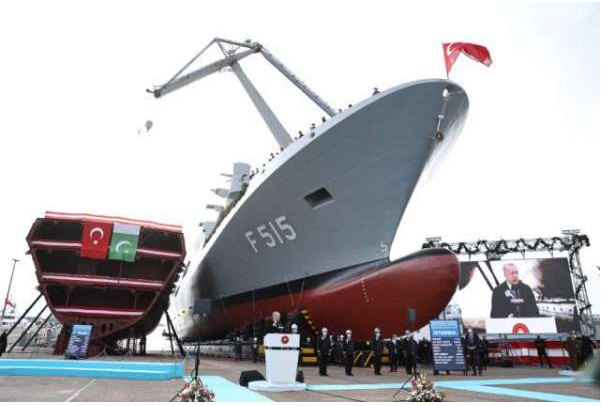 Long live Pak-Turkish friendship! Turkey has started manufacturing modern weapons for Pakistan
Will meet Pakistan’s defense needs, Turkish President Recep Tayyip Erdogan announced at a ceremony in Istanbul
The President said that he would meet the defense needs of Pakistan. According to details, Pakistan and Turkey are taking various steps to further strengthen their relations. A major breakthrough has been made in this regard on Saturday. According to Turkish media, Turkey has started construction of third modern warship for Pakistan.
Under the agreement reached between the two countries, two warships will be built in Turkey and two in Pakistan. Turkey has handed over one warship to Pakistan, another warship is being prepared in Pakistan, for which Turkish technology has been transferred to Pakistan. The construction of the third warship has now begun in Turkey.

A special ceremony was held at the Dark Yard headquarters in Istanbul, Turkey.

Turkish President Recep Tayyip Erdogan and Pakistan’s Ambassador to Turkey Cyrus Sajjad Qazi also attended the ceremony. Inaugurating the construction of a warship for Pakistan during the ceremony, the Turkish President said that Pakistan would meet the defense needs of its allies in every possible way. The relations between Pakistan and Turkey are very strong at all levels.