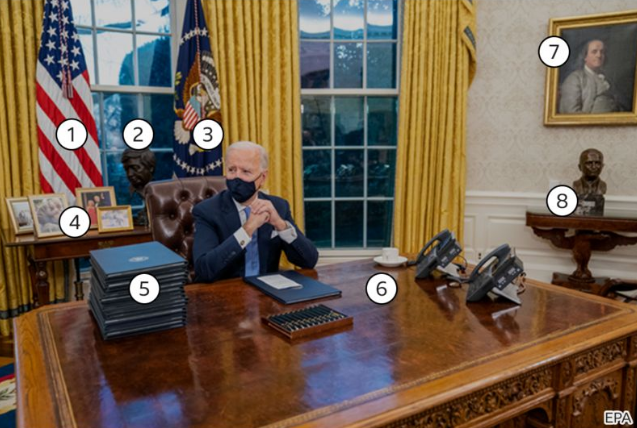 Oval Office Renovation: How Different Is Biden’s Office From Trump’s Office?
All the new presidents who come to the United States decorate the Oval Office in their own way in the White House, and so there is a lot of curiosity about how the newly elected Biden has decorated the Oval Office.

Joe Biden has filled his office with paintings and sculptures of the most important and well-known figure in American history.

Ashley Williams, deputy director of Oval Office operations, told the Washington Post: “It was important for President Joe Biden to enter an Oval Office that reflects the United States and gradually I wondered how he would be president.

A painting by Andrew Jackson, the seventh president of the United States, has been removed. President Trump often called himself Andrew Jackson, and Andrew Jackson also faced censorship from the Senate but was not indicted.
Andrew Jackson’s picture on the left of the presidential desk is replaced by Benjamin Franklin, one of the founders of the United States and a leading author, scientist, and philosopher of his day. The Washington Post says Franklin’s picture is intended to reflect President Biden’s interest in science.
When Biden looks up from his desk, he sees statues of Martin Luther King and Robert F. Kennedy in front of him. The efforts of these two figures in the civil rights movement have greatly influenced Biden.

Also in the room will be another statue of Rosa Parks, another key figure in the movement. There will also be another Alan Hauser statue depicting Cherika, an Apache horseman, and his horse. The statue was previously held by Hawaii Senator Daniel Inouye.